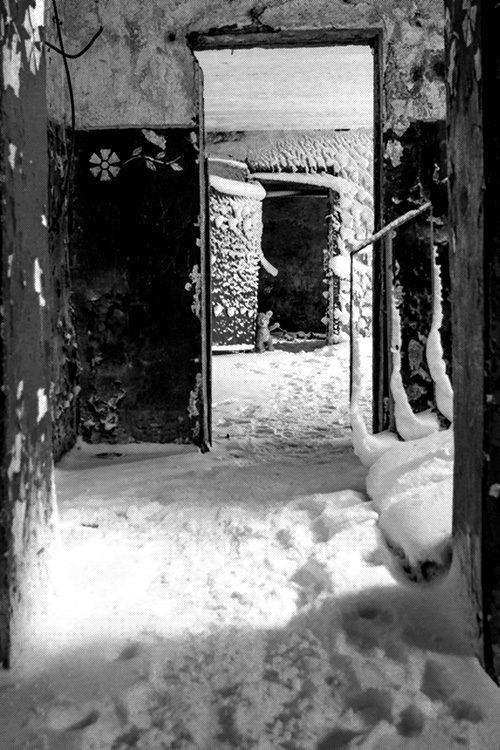 “Go to sleep you little baby…”

More singing. Still a child’s voice but not Ruby that time. Another girl’s voice that was a shade deeper.

Mourning slowly moved further down the hallway in the direction of the singing.

“When you wake, you’ll have cake,” the new voice sang softly, slowly.

Ruby had a friend with her?

When she had almost reached the end of the hall, she stopped to listen.

“And all the pretty little horses…”

Mourning thought she’d heard that song before. A long time ago. She couldn’t remember where.

And she didn’t want to get lost but the “shhh” that broke the silence as she carefully moved forward was louder. She was getting closer.

Carpeted steps came down on her left and there was another hallway that curved off to the right. An old wooden platform divided them. When she used her light, she saw there was a room beyond if she just went straight. But it was quiet. She didn’t know her way around.

Watch me get my dumb ass lost in here.

It wasn’t Ruby’s voice, but it came from straight ahead. She still didn’t see a light. What were they doing down there in the dark?

The platform creaked under her weight as she crossed it, coming down into what must have been a nurses’ station. The corner had cabinets, one with a door hanging from an old hinge over a dirty sink. The counters on either side were dusty but the paint buckets sitting on them looked fairly new.

Okay, someone had been working down here recently.

On her right was what looked like another prop room. Fake flowers in old stands like they’d been taken from a graveyard littered the floor next to a stack of old furniture. Desks and an old rocker. Since she was in the basement, there was only one small window at the very top of the wall on one side of the room. There was a concrete shelf built into the wall on the other.

The sharp cry in a child’s voice had her heading back to the nurses’ station, going straight through to the room on the other side.

The large room she was in was for the most part empty. A plastic table with its legs tucked under it was propped against a wall next to a stack of plastic chairs. Flashing her light around showed her three rooms with large metal doors. Each had a small, diamond-shaped window on eye level.

Two of the doors were pulled closed but the third was open so she headed in that direction, moving slowly and listening for any sound.

Now it was quiet. Too quiet.

When she reached the room, Mourning’s heart lurched to see Ruby sprawled face down on the dirty stone floor, her crutch just out of her reach.